Before anything else, our thanks to Mr Syd Field’s book, Screenplay: The Foundations of Screenwriting, for helping the author better understand the three-act structure; in the future, The Autheurs’ Reverse-Screenwriters’ Club will use that three-act structure: set-up, dramatic spine and climax. 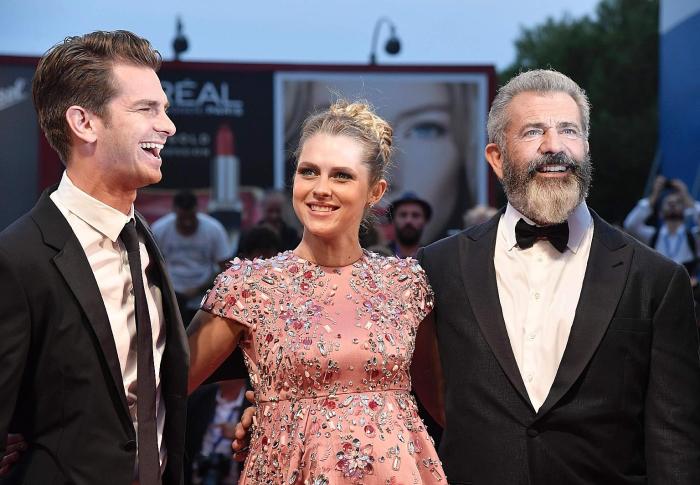 (from left to right) Stars Andrew Garfield and Teresa Palmer and director Mel Gibson at the 2016 Venice Film Festival premiere for their 2016 feature film, Hacksaw Ridge (StraitsTimes.com Photo and Caption)

Director Mel Gibson’s 2016 feature film, Hacksaw Ridge, is, more than anything else, a study of the matter that keeps men going. In family, in work and at war.

People need something – visions, talk or spoken or unspoken belief – to carry them through  life; star Andrew Garfield’s Desmond Doss holds together in the face of World War II because of his non-violent convictions.

Among the salient points made by director Mel Gibson in 2016’s Hacksaw Ridge, are that men are defined (and in cinematic terms. better written/defined) by their convictions (à la Desmond’s insistence that ‘I’m not all up above. I simply believe what I believe’ to Richard Roxburgh’s Colonel Stelzer and similar insistences to everyone else; this contrasts with Luke Bracey’s Smitty’s lack of similar personal, not organisational, motivation).

Said convictions are also hard to defend and hold onto (as seen by Desmond’s decision to remain non-violent despite being beaten up by his fellow soldiers, thrown in jail and being court-martialled for his unyieldingness).

Shifting towards combat, enemies are (supposedly) made easier to kill by dehumanising them (as suggested by Sam Worthington’s Captain Glover that, ‘this is Satan himself that we’re fighting’ and the – save for their command and infantry classes – indistinct portrayal of the Japanese forces).

Vis-à-vis combat, nightmarish imagery are often as powerful as speeches to incite military action or preparedness (as seen by the film’s smooth editing in of Desmond’s nightmare sequences just before his meeting with Captain Glover and Teresa Palmer’s Dorothy in the film; the screaming soldier acting as a prelude to the start of firing; and Desmond’s Japanese flare nightmare that precedes the next day’s warfare).

The above being said, the film’s most driven and eventually respected character is Desmond; this is because of his beliefs in non-violence from the film’s start through to the end.

The film does, as seen in the transition from Act 1 to Act 2, use the intervention of Hugo Weaving’s Corporal Thomas Doss to make Desmond’s foes accept his non-violence. This particular instance is somewhat fortunate in its arrival and effect.

The Japanese army, with the fleeting exception of its ‘surrendering’ officers, is shown as part of an unflappable mass of troops which, despite Captain Glover’s belief that, ‘nobody can survive that (naval bombardment)’ is shown to be relentless nevertheless.

That being said, the foxhole-stranded wounded Japanese officer who keeps Desmond’s presence nearby secret after the latter bandages him, suggests that dehumanisation always runs aground on reality.

The film’s use of nightmare sequences often advances the domestic abuse subplot whilst foreshadowing character decisions and military action (à la the defence of Hacksaw Ridge the next day). The use of nightmares, as opposed to dreams, to induce action also fits with film’s grim tone. 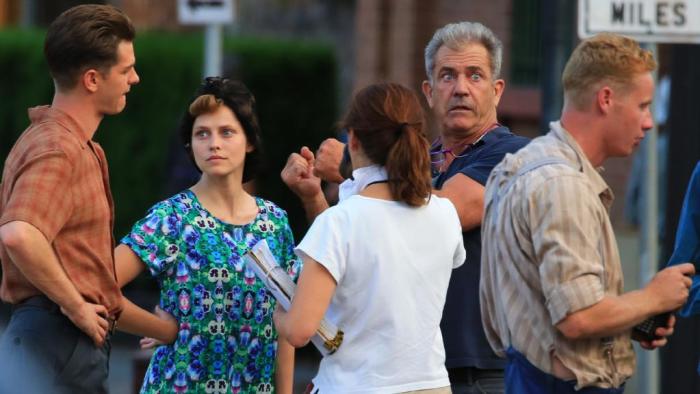 Very simplistically, director Mel Gibson’s 2016 feature film, Hacksaw Ridge, is a variedly-coloured-matched-to-mood (note the shift from forest green to white to army green to grey to blue and back to white through the film) bloody war film with a sound mix that overshadows its soundtrack.

(Whilst the opinions and observations above are, unless stated otherwise, the author’s own, the following sources were used for information: ABCNews.go.com, BirthMoviesDeath.com, CatholicNews.com, GQ.com.au, IMDb.com, Telegraph.co.uk, VanityFair.com, Variety.com, WSJ.com, WSWS.org)

Plot: an aspiring Army medic seeks to help his fellow soldiers whilst following his non-violent beliefs.

Act 1: Desmond faces the military court martial over his refusal of weapons; Desmond is cleared to serve in the military.

Act 2: Desmond evacuates soldiers during the advance on Hacksaw Ridge; Desmond remains, post-retreat, to evacuate the soldiers left behind.

Act 3: Desmond leads the soldiers into a new advance on Hacksaw Ridge; Desmond is evacuated to home after being wounded in service.

Epilogue: a montage of footage and interviews illustrate Desmond’s service and Medal of Honour award.