(from left to right) Star Edward Norton and director/co-screenwriter Gavin O’Connor at an event for their 2008 feature film, Pride and Glory, at the 2008 Toronto International Film Festival (Zimbio.com Photo and Caption)

Over the course of 2008’s Pride and Glory, director/co-screenwriter Gavin O’Connor makes the that professional and familial responsibilities are often at odds with each other (à la Ray’s investigation being restricted by Jon Voight’s Francis Tierney Sr’s demands for loyalty which lead to his, ‘we protect our own, Ray. That’s all’ conversation with Ray near the film’s end).

Separately, that professional moral failure is hard to live down (as seen by John Ortiz’s Sandy’s confession to Maximiliano Hernández’s Carlos that, ‘the pride that I felt, fuckin’ glory (on being a police officer), we let it all out from under us’ before killing himself in Carlos’ car).

In a similar vein, that morality is more likely to exist in large organisations as opposed to smaller bands of individuals (as seen by Colin Farrell’s Jimmy Egan’s violent interrogation of Manny Perez’ Coco Dominguez which lead up to, ‘you tip Angel off, I’m going to make it even worse’).

Again – and much like director Edward Zwick’s 1996 film, Courage Under Fire – pursuing the truth is always difficult to find and share (as experienced by Ray when asking Noah Emmerich’s Francis Tierney Jr about Sandy, when defending his investigation to Francis Sr and his evasiveness to share the truth about Ramon Rodriguez’s Angel Tezo’s death with the police).

The above being said, director O’Connor, and Ray, repeatedly make the point that Ray’s family responsibilities conflict with his duty to the police, as shown in Francis Sr’s ‘anything that makes cops look culpable is no good, Raymond!’ conversation with Ray which leads to his ‘this is not just about the department (…) this is family!’ confrontation with Ray near the film’s end.

The longevity of moral failure is further reinforced by Francis Jr confronting Jimmy over their actions – ‘what we’ve doen does not get forgiven, Jimmy’ – and confessing his feelings over the same to his wife, Jennifer Ehle’s Abby – ‘and I am really fucking scared’.

As attested to by Sandy’s ‘we sold our shields off’ and ‘I can’t undo it now. There’s no atonin” conversation with Carlos, Jimmy, Kenny, Eddie and Sandy’s drugs-related operation was amoral. Jimmy went so far as to threaten to burn Angel’s child’s face with an iron whilst interrogating him.

Ray’s reluctant search for and admission of the truth – starting with Francis Sr’s encouragement to ‘no matter what we have forsaken of ourselves, we can’t forsake them (the killed police officers)’ and leading to Ray’s confrontation with Internal Affairs that, ‘I know what you guys want me to say, but it’s not going to happen’ – is a long and difficult road, culminating in the film’s cliffhanger ending in the courthouse. 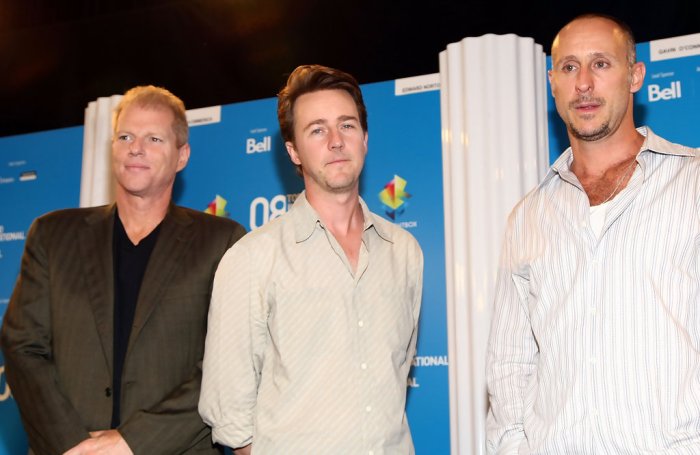 (from left to right) Stars Noah Emmerich and Edward Norton and director/co-screenwriter Gavin O’Connor at an event for 2008’s Pride and Glory at the 2008 Toronto Film Festival (Zimbio.com Photo and Caption)

Very simplistically, and in the vein of his 2007 feature film, Miracle, director/co-screenwriter, Gavin O’Connor’s 2008 feature film, Pride and Glory, takes an hour to get going but is hard to tune out of when it gets into gear.

The cool colour tone, tension-proportionate handheld camerawork and electronic score are all becoming hallmarks of director O’Connor’s work. This makes 2008’s Pride and Glory an excellent entrypoint into his filmography for newcomers.

(Whilst the opinions and observations cited above are, unless stated otherwise, the author’s own, the following sources were used for information: IMDb.com)

Plot: a trio of generational policemen deal with issues of loyalty to their family and their ideals.

Act 7: Ray decides to interview the shopkeepers’ son; Jimmy decides to track down the surviving gangsters.

Act 8: Jimmy decides to burn the getaway car; Ray decides to resume his investigation of the killings.

Act 29: Jimmy, Kenny and Eddie decide to give their statements to Internal Affairs; Jimmy decides to implicate Ray in Tezo’s murder.

Act 34: Ray and Jimmy decide to fight; Ray decides to knock Jimmy out.