Newcomer Nick, portrayed by Cori Gonzalez-Macauer, is reluctantly accepted into the ranks of centuries-old vampires, Viago, Vladislav and Deacon.

He introduces himself as a vampire to the attendant documentary crew and in that moment becomes our eyes and ears into the world (and the hype) of vampires, from start to film’s finish.

(from left to right) Jemaine Clement, Taika Waititi, Ben Fransham, Jonny Brugh (top), Cori Gonzalez-Macauer and Stu Rutherford in a scene from their 2014 feature film, What We Do in the Shadows (WeekendNotes.com Photo)

Also, that life is full of disappointments (akin to Jackie van Beek’s Jackie being passed over for vampire status by Deacon and Viago having to go decades without marrying his love).

Moreover, that society only works when its groups compromise and show compassion to each other (much like Deacon agreeing to do the dishes and how Rhys Darby’s Anton brings Stu back to the vampires).

That being said, time does not heal all wounds, especially in relationships (similar to Vladislav choosing to avoid the masquerade and his ex-girlfriend, Pauline, whilst Viago can only observe his love from a distance).

(from left to right) Star Cori Gonzalez-Macauer, producer Emanuel Michael and co-director/screenwriter/star(s) Jemaine Clement and Taika Waititi at a New York City screening for 2014’s What We Do in the Shadows (Zimbio.com Photo and Caption)

The above being said, and at the expense of the film’s villains – Elena Stejko’s Pauline/The Beast and Brad Harding’s vampire hunter – only Viago, Vladislav, Deacon and the werewolves are more than appearances-deep.

Nick’s life is full of angry disappointment – he leaves post-Deacon fight, shouting of vampire-dom, ‘don’t believe the hype, it’s shit!’ – and shows that our characters’ lives – Jackie, Viago and Vladislav – are marked by their disappointments and struggle to overcome them.

More explicitly done is the view that communities work due to compromise and compassion. This point worked best during the vampire fight near the film’s end when Pauline could not accept Stu’s presence in an undead-only party over pedantry of the rules.

In 2014’s What We Do in the Shadows, characters do suffer but do ‘heal’ by the film’s end. This happened with Viago and his love; however, Vladislav and Pauline only remembered why they hated each other, to begin with. 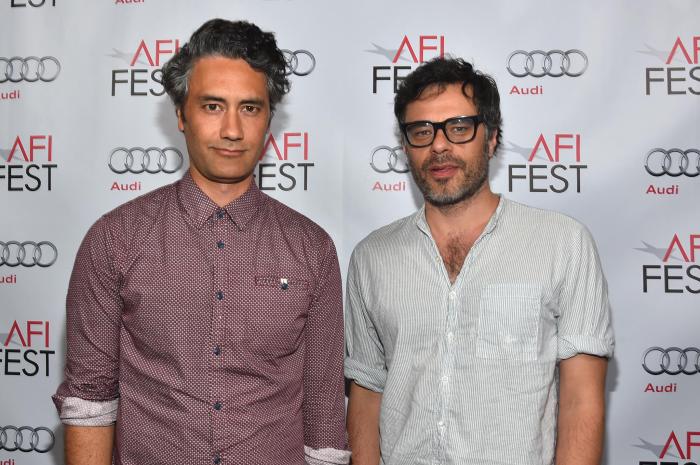 (from left to right) Co-director/screenwriter/star(s) Taika Waititi and Jemaine Clement at the 2014 AFI Fest in Los Angeles (MovPins.com Photo and Zimbio.com Caption)

The above being said, co-director/co-screenwriters Taika Waititi and Jemaine Clement’s 2014 feature film, What We Do in the Shadows is worth watching for its evident  vampire-inspired comedy and for the human-inspired commentary woven in.

By including Nick as the audience’s point of view, the idea of humans-made-vampires is front and centre; this builds on the documentary-meets-movie feel of 2014’s What We Do in the Shadows.

Director Taika Waititi’s Trademarks in 2014’s What We Do in the Shadows:

(Whilst the opinions and observations cited above are, unless stated otherwise, the author’s own, the following sources were used for information: IMDb.com)

Plot: a group of secret Wellington-set vampires share their lives with a documentary crew.

Act 2: Viago, Vladislav and Deacon decide to try and get invited to the clubs around town; Deacon decides to ask Jackie to bring them victims.

Act 7: Nick decides to confide his vampire-ness to his friend, Stu; Viago, Vladislav, Deacon and Nick decide to welcome Stu to their flat.

Act 8: Viago, Vladislav, Deacon and Nick decide to return to the club; Nick decides to tell the clubbers he’s a vampire.

Act 11: Deacon decides to fight Nick over his disclosure to the vampire hunter earlier; Viago decides to admit the police investigating the commotion.Act 12: Viago, Vladislav, Deacon and Nick

Act 13: Viago, Vladislav and Deacon decide to prepare for the Unholy Masquerade; Viago  Deacon and Stu decide to go without Vladislav.

Act 14: Viago and Deacon decide to meet Nick and the recently-bitten Jackie at the ball; Viago decides to reveal Stu’s human nature to Pauline.

Act 15: Vladislav decides to intervene and save Stu from Pauline; Vladislav and Stu decide to kill Pauline’s boyfriend.

Act 17: Deacon decides to comfort Nick over his loss; Viago, Vladislav, Deacon and Nick decide to let Stu be taken by the paramedics and police.

Epilogue (over credits): Vladislav gets back together with Pauline; Stu adjusts to being a werewolf.