Superhero films, as evidenced both in metaphor and often exposition, aren’t simply about good versus evil or even shades thereof anymore.

Nor, by virtue of director Tim Burton’s 1989 feature film, Batman, were they ever quite, so recently anyways, cut-and-dry.

Without resorting to explaining things best left shown in the background, 1989’s Batman depicts the struggle for greater – often metahuman – power that superhero films are generally about.

(from left to right) Star Michael Keaton and director Tim Burton on the set of 1989’s Batman (CNN.com Photo and Caption via ITANews.ru)

Over the course of 1989’s Batman, director Tim Burton appears to make a few salient points, with emphasis on how public trust often follows private money but flees government (as seen by how the Joker’s twenty million dollars are welcomed but the mayor’s pleas to attend Gotham City’s anniversary celebrations are not).

There’s also the allusion to life being an unending struggle for power and respect, from childhood to adulthood and across careers (as seen in Knox’s struggles to get his Batman coverage acknowledged whilst Commissioner Gordon tries to maintain control over Lieutenant Eckhardt).

Much like 1988’s Beetlejuice, violence and vandalism are often in the eye of the beholder and that all depends on how its presented on-screen (à la the Joker’s facial disfigurement, murder and electrocution/incineration of others which are all accompanied by comical sound effects).

The above and how the pursuit of art for art’s sake is a surefire way to trouble – à la director Burton’s quote of ‘it’s like getting into film – I didn’t say early on, “I’m going to become a filmmaker,” “I’m going to show my work at MoMA (Museum of Modern Art).” When you start to think those things, you’re in trouble‘ – and as seen by the Joker’s pursuit of murder and vandalism for art’s sake.

(from left to right) Director Michael Keaton and star Jack Nicholson on the set of 1989’s Batman (Edition.CNN.com Photo and Caption)

The film, under director Burton’s eccentric and socially-isolated Bruce Wayne/Batman, does deliver the point that people do trust moneyed folk as long as they aren’t government, as was the case with the Joker. Bruce Wayne/Batman is the exception until the film’s end, given Knox’s stance on Bruce’s eccentricity stemming from his wealth.

For what its implications are worth, the Bat-signal isn’t introduced until the film’s third-last scene. So private money needn’t always attract public trust.

Harkening back to Delia Deetz’s ‘you have got to take the upper hand in all situations or people,‘ comment from 1988’s Beetlejuice, the film paints different struggles for its working (à la Gotham City citizens’ desperation with businesses leaving) and moneyed cast members (Bruce Wayne’s inner turmoil over his parents’ murder and pursuit of their killer). Those wouldn’t be out of place in society.

Portrayed with Burton-esque comic sensibilities and industrial-y designs, violence is only interpreted as such if it is presented otherwise. The  Prince soundtrack whilst the Joker vandalises artwork and gasses Gotham City’s population, makes the violence seems surreal-ly-comic but never anything but comic.

The Joker’s pursuit of art, specifically the homicidal variety is something that only appears infrequently through the film – only really surfacing after his discovery of Vicki – and doesn’t reappear near the film’s climax atop the bell tower.

Director Tim Burton on the set of 1989’s Batman (OnePerfectShotDB.com Photo and Caption)

That being said, the film works better at a commentary of private money versus public authority and the dichotomy of economic backgrounds than some of the more explicit superhero-laden commentaries in film of the 21st century.

That it carries this commentary but masks it behind its distinctly Burton-esque aesthetic makes it rewatchable. 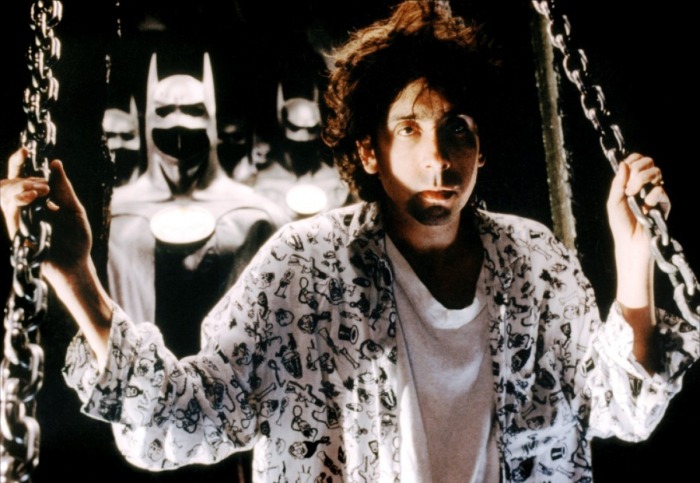 Director Tim Burton behind the scenes of 1989’s Batman (TheRedList.com Photo and Caption)

(Whilst the opinions and observations above are, unless stated otherwise, the author’s own, the following sources were used for information: BrainyQuote.com, Cinelinx.com, IMDb.com, io9.Gizmodo.com)

Plot: a masked vigilante attempts to defeat the mobster-turned-supervillain, the Joker.

Prologue: Batman decides to apprehend the muggers; Jack decides to spare Eckhardt’s life in the alley.

Act 1: Vicki decides to meet Knox for the first time; Jack decides to head to Axis Chemicals; Vicki and Know decide to go to the Wayne Gala together.

Act 3: Jack decides to engage the police and escape up the factory; Batman decides to catch him but fails to save him from falling over.

Act 4: Vicki and Bruce decide to have dinner together; The Joker decides to confront Grissom after escaping from plastic surgery.

Act 5: Jack decides to confront the other mob bosses; Bruce decides to visit his parents’ murder site and Vicki chooses to follow him there.

Act 6: Bruce chooses to attend the mob boss’s press conference; Vicki opts to follow him there; The Joker decides to kill the mob boss in plain sight.

Act 8: The Joker decides to announce his existence to Gotham City; Bruce, Vicki and the Joker all head to the museum.

Act 9: The Joker decides to attack the museum and confront Vicki; Batman decides to rescue Vicki and escape.

Act 12: Bruce decides to reveal his identity to Vicki, unsuccessfully; Vicki decides to confront him about his alley haunts; the Joker decides to enter Vicki’s apartment.

Act 14: Vicki decides to visit Knox to learn more about Bruce; the Joker announces his gala plans to Gotham City.

Act 17: Jack decides to gas the nearby crowd through the balloons; Vicki decides to take shelter in Knox’s car; Batman decides to tow Joker’s balloons away from Gotham.

Act 19: The Joker decides to keep ascending the cathedral with Vicki; Batman decides to follow them and confront the Joker’s henchmen.

Act 20: The Joker decides to dance with Vicki around the bell tower; Vicki decides to distract the Joker and Batman chooses to attack him.