Director Antoine Fuqua’s 2014 feature film, The Equalizer, at the risk of a better intro than the above which is discarded with the word ‘discarded‘, often pegs the same question, with varying subtlety: what do you see when you look at me?

Barring the often on-the-nose metaphors, near Fuqua-transcendent cinematography and Fuqua-isms, which we’ll get to shortly, it is a film about people looking to escape their past lives and start anew: the likes of Bob’s evolution to full-time community protector by film’s end, Teri’s escape from prostitution, Teddy’s implied backstory and mafia boss, Pushkin’s experiences as an oligarchic mafia boss. 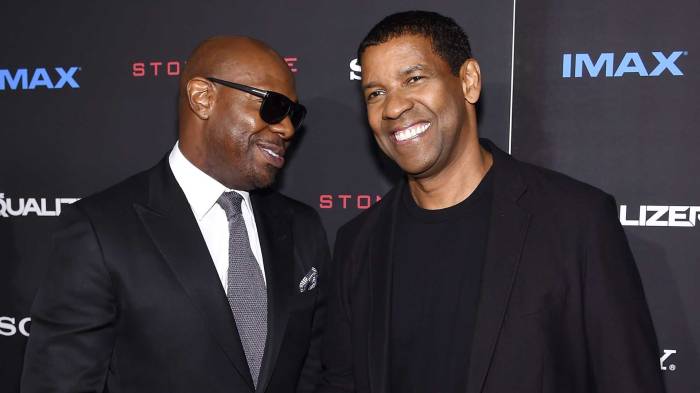 (from left to right) Director Antoine Fuqua and star Denzel Washington at the New York City premiere of their 2014 feature film, The Equalizer (Variety.com Photo and Caption)

That being said, and much like the previous films in director Antoine Fuqua’s filmography that we spoke of – 2001’s Training Day, 2003’s Tears of the Sun and 2016’s The Magnificent Seven – there are the following old (and tentatively newly-identified) trademarks that are worth looking out for in 2014’s The Equalizer:

That being said, the focus of the direction is very much on Bob with him commanding the camera’s focus until Teddy arrives and splits that and screentime between them. 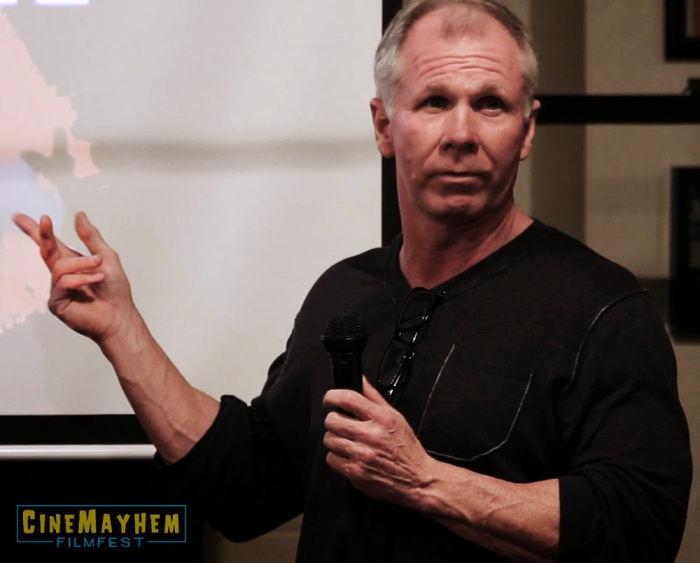 The script, by 2016’s The Magnificent Seven‘s co-screenwriter, Richard Wenk, often follows the theme of fresh starts and quite a few of the cast – the post-secret life Bob; the prostitute, Teri; the assassin, Teddy; the detective, Frankie; and even the mafia boss, Pushkin – dabbled with that idea before or during the film’s runtime. The film ends on that note too, with Bob starting fresh, with some inspiration, online and in the world.

That being said, the film’s use of metaphor – the likes of the Swan Lake music box playing in Mandy’s room, Teddy’s devil tattoos coming into focus and fading as his chest dissolves to the Boston skyline and the skull scene in Slavi’s office – appear a little on-the-nose but still interestingly done. The idea of a tinkling music box counting down to death especially.

That being said (and with further metaphor commentary shunted to the cinematography section)….

There are two core acting pairs in 2014’s The Equalizer: between Chloë Grace Moretz’s Teri and Denzel Washington’s Bob and between Marton Csokas’s Teddy and Denzel Washington’s Bob. The former is onscreen for some of the film’s first third and epilogue (and propels Teri into attempting to reform out of prostitution) whilst the latter is there for the film’s middle, until the epilogue, and sees Bob choose to evolve from a well-trained and samaritan into a full(er)-time community protector.

That being said, the latter pair is more developed with greater backstory for both Bob and Teddy being revealed, and the similar skill-sets, but inverse moral disposition (or in Teddy’s case, a lack thereof entirely), becoming known.

This reaches a level of duality on-screen to the point of 2014’s The Equalizer almost becoming A Tale of Two Equalizers. That being said…

The score, by composer Harry Gregson-Williams – and in the absence of a standalone listen, I dearly hope – maintains a balalaika-driven theme for Teddy whilst using surges in its Thomas Newman’s Spectre– and Gregson-Williams own The Martian-inspired score to lead in to action scenes.

The best way to describe the score is something like Hans Zimmer meets Thomas Newman but the result isn’t just a crossover between the two: the resulting sound is distinctly Harry Gregson-Williams-ian.

Director of Photography, Mauro Fiore, with his Best Cinematography Oscar for 2009’s Avatar at the 2010 Academy Awards (The Associated Press Photo and Caption via Omaha.com)

Courtesy of 2001’s Training Day and 2003’s Tears of the Sun‘s Director of Photography, Mauro Fiore. The film’s dominant colour palette is gold, orange, blue and a sweaty pallor with plenty of the amber and ochre that we’ve come to associate with the cinematography in both films above and 2016’s The Magnificent Seven.

That being said, there were quite a few things about the cinematography in 2014’s The Equalizer – including its restrained use of lens flares as both lighting and allusions to searchlights and observation; its use of near-symmetrical hall and doorway photography, a sequence of which culminates in a shot over Teddy’s head, chest and onto the Boston skyline; the David Fincher/Jordan Cronenweth-esque colour palette and smooth camera pans; allusions to Bob’s stubbornness/steeliness through its use of muted blues and sweaty pallor – in addition to the Fuqua-esque depictions of violence and photography of action scenes.

On the inspired cinematography front, there appears to be an allusion to a Robert Rodriguez’ Sin City-vibe meets an overcast Zack Snyder-esque aesthetic during the film’s climax. It works at that moment though even if the style seems observably inspired.

Very simplistically, director Antoine Fuqua’s 2014 feature film, The Equalizer, is every bit as Fuqua-esque as you’d hope (and then some) with interesting moral inversion between its two leads and especially metaphor-laden cinematography. Quite the entry-point for the new and addition to director Fuqua’s filmography for the old.

(Whilst the opinions and observations cited above are, unless stated otherwise, are the author’s own, the following sources were used for information: IMDb.com,  Indiewire.com, PittsburghUrbanMedia.com, TheGuardian.com)

Plot: a retired operative tries to track down and defeat the Russian mafioso who victimised his friend.

Act 1: Bob decides to go to work in the morning; Bob goes to the diner after work and decides to speak to Teri there.

Act 3: Bob decides to train Ralphie in the store yard for his security-guard test; Bob decides to return to the diner and chooses to receive Teri at his table

Act 4: Bob decides to walk with Teri outside; Bob chooses not to intervene after seeing her taken away.

Act 6: Bob decides to help Teri’s friend in the hospital corridor; Bob chooses to speak to her and learn more about Teri’s life.

Act 9: Bob decides to help Ralphie rebuild his mother’s restaurant; Teddy decides to visit the Irish gangsters and kills them after they prove stubborn.

Act 10: Teddy decides to interrogate Teri’s friend and kills her; Bob decides to confront the extortion cops going after Ralphie’s mother; Bob chooses to fight them into submission.

Act 11: Bob chooses to receive Teddy at his front door; Teddy decides to leave after making his enquiries; Bob and Teddy both decide to prepare.

Act 12: Bob chooses to confront and kill the construction worker/assassin in the diner; Bob decides to photograph Teddy’s car and passengers outside whilst leaving.

Act 13: Teddy and company decide to keep pursuing Bob in the alleys; Bob decides to kill one of them and escape home.

Act 14: Teddy and company decide to raid Bob’s flat; Bob opts to monitor them from across the street.

Act 15: Bob decides to escape to Susan’s home in the country; Bob opts to ask her about Teddy and his employers.

Act 16: Bob decides to return to Boston and interrogate Frankie; Bob then chooses to follow Frankie to Andrei’s facility.

Act 17: Bob decides to confront Andrei and his men to stand down; Bob then decides to get the bank information from Frankie.

Act 18: Teddy decides to depute other assassins against Bob; Bob decides to meet Teddy directly and chooses to give his ultimatum.

Act 19: Bob decides to send all of the retrieved bank information to the FBI; Bob then chooses to blow up Teddy’s employer’s oil tankers.

Act 20: Teddy decides to confront Bob with Bob’s co-workers as hostages; Bob decides to head down to meet Teddy.

Act 21: Bob decides to go straight for the hostages instead of Teddy; Teddy chooses to go to the store to confront Bob.

Act 22: Bob decides to switch off the lights and lock Teddy and his men in the store; Bob then chooses to kill Teddy’s men.

Act 24: Bob decides to head to Moscow; Bob chooses to confront Pushkin, the mob boss, in his home and kills him.