A misunderstood boy seeks to escape from his picture-perfect middle-class neighbourhood into an unknown and darker world where he seeks his grandfather’s true legacy.

If that isn’t a basis for a Burton-esque Tim Burton-directed feature film, please sound off right now in the comments below. 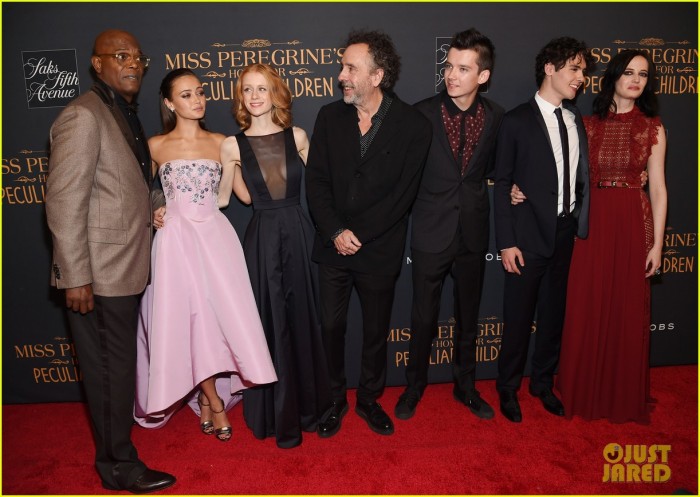 There aren’t as many observable Gothic call-outs in terms of architecture, but the often concomitant aesthetic contrast between the dark and unexplored and the near-pallid-ly polished and pruned suburbia is very much there.

If 2016’s The Magnificent Seven‘s tinted skin and sweat are what you remember the clearest about it, 2016’s Miss Peregrine’s Home for Peculiar Children will leave you pondering over the curious pallor and orderliness of its characters. 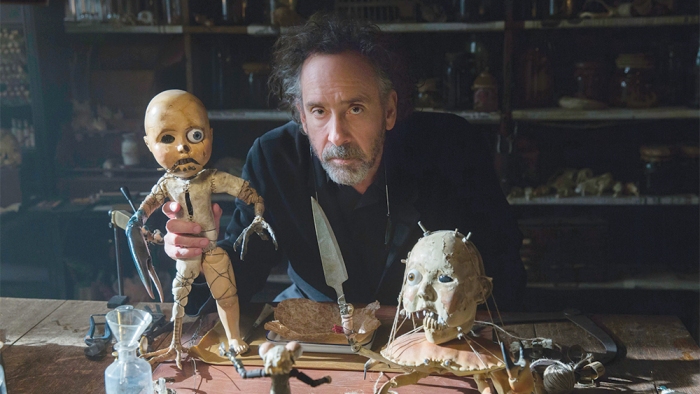 Director Tim Burton photographed with some props on the set of his 2016 feature film, Miss Peregrine’s Home for Peculiar Children (Variety.com Photo and Caption)

With that in mind, please note that 2016’s Miss Peregrine’s Home for Peculiar Children counts as our sixth fully-viewed Tim Burton-directed film; the others being 1989’s Batman, 1996’s Mars Attacks!, 2001’s Planet of the Apes, 2005’s Charlie and the Chocolate Factory, and 2010’s Alice in Wonderland being the rest.

With that in mind – and several references to the articles by Cinelinx’s G.S. Perno,  io9’s Meredith Woerner, SensesOfCinema’s Ben Andac, CheatSheet’s Thomas Mentel, Illusion Magazine’s Martyn Conterio, and Aesthetica Magazine’s Niamh Coghlan among many others – let’s get trademark-hunting.

Among the, for lack of better phraseology, Burton-isms in 2016’s Miss Peregrine’s Home for Peculiar Children are the following:

As always, please sound off in the comments if you can find any Burton-isms that we’ve missed. Thank you.

The screen adaptation, courtesy of screenwriter Jane Goldman, keeps the necessary Burton-isms in the novel – the socially-misunderstood protagonist, the basis for starkly-contrasting aesthetics and strained parental relationships – whilst making the story cinematic in the process and fusing the novel’s first half of buildup into key scenes in the film.

Whilst some excise literary moments have been excised – the sequel-lending ending is gone, Enoch’s jealousy of Jake is greater in the film and Olive and Emma have switched powers – the film is generally better and straightforward-er for it despite the mechanics of loop-escape being unclear.

Ideally, the ones who left the loop and got on with their lives, ageing and all, just emerged into the era around them not through the loop directly, right? 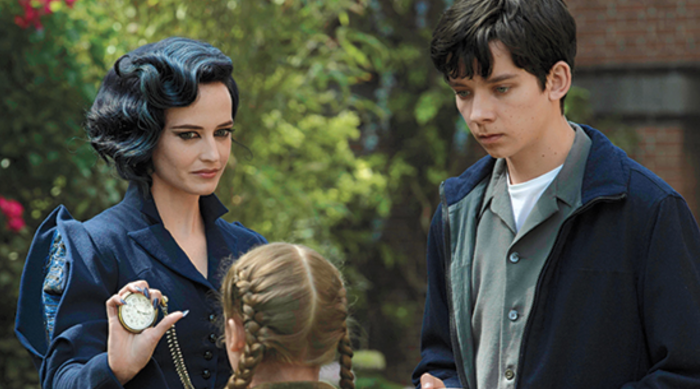 That being said, the only culmination for either of the above is Jake’s who evolves from being a misunderstood teenager who is impliedly-inclined to leave his existing family to one inclined to return to his new one (in their native era).

The score, courtesy of co-composers Matthew Margeson and Mike Higham, has some Alien-y cues in it, but for want of a standalone listen until the album’s release, it’s hard to say much else.

The cinematography, courtesy of Director of Photography Bruno Delbonnel, works well in conveying the sweaty pallor of those on screen, whether they be Hollows, Peculiars or humans. Among the tints

Among the colours that do stand out across environments are blue, grey and white as especially characterised in the scene when Jake visits his grandfather’s house. Less common, but equally distinct, are the orange, green and white that make up the daytime suburban neighbourhoods.

There’s some interesting point-of-view photography when the final attack on the Hollows begins at Blackpool pier. Somewhat relatedly, the first scene with Barron and Jake (as hinted at in the trailers) uses some interesting shadow-work for a film that doesn’t use such technique often.

Lastly, the 3D is generally very good and pop-y with the pallor-accentuating photography.

Very simplistically, director Tim Burton’s 2016 feature film, Miss Peregrine’s Home for Peculiar Children is very much a source material-controlled Tim Burton film with the effects of both being dialled back somewhat. Newcomers to director Burton’s filmography may find this a lighter way to start Burton-ism hunting whilst existing fans, barring any predispositions against teenage novels, might want to drop by the cinema this weekend.

Prologue: a montage of vintage photographs of the peculiars and maps with penned coordinates opens the film.

Act 3: Jake decides to confess his dreams and fears to Dr Golan, his counsellor; Jake wakes up from his nightmares.

Act 5: Jake and his father decide to head off to Cairnholm Island; Jake decides to explore the island’s far side with Worm and MC Dirty D.

Act 6: Jake, convinced by Worm and MC Dirty D, decides to take the shortcut through the woods; Jake decides to return after finding the bombed-out home.

Act 8: Jack decides to follow the children into the cave/loop; mid-route, Jake decides to escape to the pub in town

Act 9: Jake, with Millard’s help, decides to escape the hotel in 1943; Jake and company decide to speedily return to the home.

Act 12: Jake decides to witness the loop reset outside the house; Jake later decides to leave for the night and decides to filch a letter from his grandfather to Ms Peregrine.

Act 13: Jake decides to return to the home without telling his father; Jake later chooses to confront Miss Peregrine over the letter.

Act 15: Jake and Emma decide to return to the beach later at night; Jake later decides to follow Emma down to the RMS Augusta wreck.

Act 17: Jake decides to tell the newly-arrived Ms Avocet about his experiences with the sheep murders in present-day Cairnholm town; Jake later chooses to return to the pub as the others prepare to abandon the home.

Act 18: Jake decides to return to the loop after learning of a murder in Cairnholm town; Jake unwittingly leads the ‘ornithologist’ to him.

Act 19: Jake, under threat, decides to lead the newly-revealed Mr Barron back to the home; after Ms Peregrine surrenders to Barron, Jake decides to fortify the house with the other children.

Act 20: Jake decides to take up Ms Avocet’s crossbow the house against the Hollows’ attack; Jake later chooses to tell the others to evacuate via Fiona’s tree.

Act 23: Jake and Emma decide to lead the Hollows back to Blackpool pier; Jake and company begin their surprise attack.

Act 24: Jake and company decide to attack Blackpool tower and the Hollows therein; Jake decides to go in and free the Ymbrynes there.

Act 27: Jake decides to return to 1943 via 1942; Jake returns to the children and Ms Peregrine who are aboard the RMS Augusta.