A man enters a bar. Its ochre-tinged denizens pay him no mind. A lone bartender tracks him to the counter. Amber sweat streaks their faces and clear alcohol flows freely. Pistols gleam silver and are deployed to crimson effect.

The man has cleared the bar and counter. 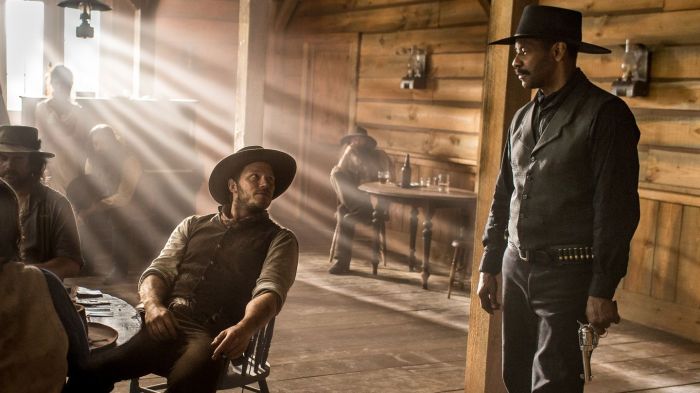 (from left to right) Stars Chris Pratt and Denzel Washington pictured in a scene from 2016’s The Magnificent Seven (MTV.com Photo and Caption)

He exits the bar. A dozen silver barrels point his way. Brandishing his frayed permit, he returns to his horse.

A crimson-haired lady approaches him. A raven satchel, weighed down with silver, changes hands. A deal is struck. The ochre sunset beckons. 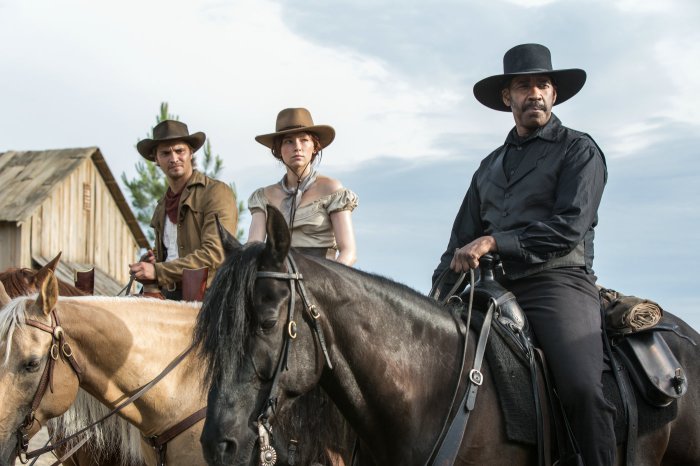 As indicated above, and notwithstanding its explosive intro and climax, director Antoine Fuqua’s 2016 feature film, The Magnificent Seven, is noteworthy for its use of colours and ochre-tinged cinematography.

(from left to right) Star Chris Pratt and director Antoine Fuqua on the set of their 2016 feature film, The Magnificent Seven (THR.ru Photo and Caption)

But after all, we’re a directorial style-related site so let’s get dissecting now; as put together from interviews by CraveOnline’s William Bibiani, BET.com’s Smriti Mundhra,  SlashFilm’s Russ Fisher, ComingSoon’s Edward Douglas, and more and our own experience with 2013’s Olympus Has Fallen, 2015’s Southpaw, and 2016’s The Magnificent Seven below:

As always, please sound off in the comments if you can find any Fuqua-isms in 2016’s The Magnificent Seven or the rest of the director’s filmography. Thank you. 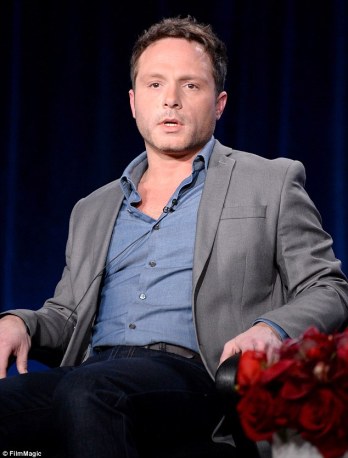 The script, courtesy of screenwriters Richard Wenk and Nic Pizzolatto, is atypical in that it doesn’t seem as much about the titular seven as it is about Haley Bennet’s Emma Cullen recruiting and pushing them, in keeping with Denzel Washington’s Sam Chisolm, along. That said there is a feeling of culmination for some of the cast – Ethan Hawke’s Goodnight Robicheaux overcomes his aversion for guns to save Rose Creek; Manuel Garcia-Rulfo’s Vazquez transitions out of criminality; Denzel Washington’s Sam Chisolm becomes vengeful towards Bogue; and Peter Saarsgard’s Bogue devolves from self-depicted-ly god-like villain to cowering human – in addition to Emma’s above.

There are allusions to religion, à la Bogue’s equation of progress, democracy and capitalism with God and Rose Creek’s defiance of those ideals by defying the manifestation thereof: Bogue himself, ‘you‘re standing in the way of God‘ and ‘may your good lord help you‘. These, barring the looming profile of the burnt church near-constantly in Rose Creek-set scenes, don’t explicitly culminate in much save for Bogue’s death atop the altar of the same church whilst being beckoned to repent.

That said, there is a general tilt towards entertaining set pieces and modern-styled quips – ‘statistically speaking, they should’ve hit something‘, ‘the Pigeon brothers weren’t famous very long‘ and the like – over being a necessarily thematic piece. Another Fuqua-ism perhaps? 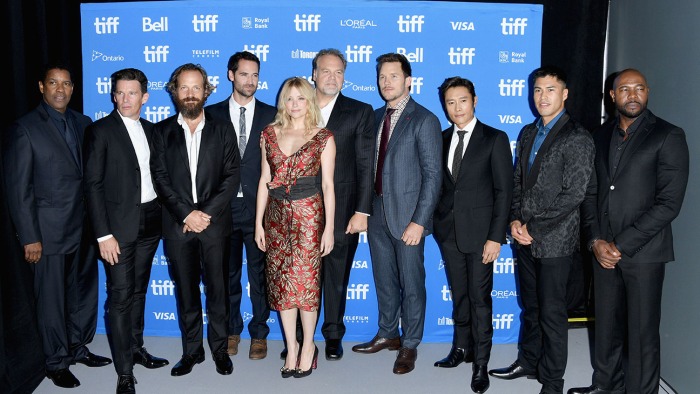 The core acting trio in 2016’s The Magnificent Seven include Haley Bennet’s Emma Cullen, Denzel Washington’s Sam Chisolm and Peter Saarsgard’s Bartholomew Bogue who, between them, propel the subjectively seen plot forward. Her transition from a housewife-esque figure to the town’s guardian by equal actively defending it and evacuating/marshalling its residents is the inverse of Chisolm’s defence of the town which reveals a personal vendetta against Bogue.

Oddly, Bogue is the greatest epitome of fighting for belief (and greed in equal measure), à la the subjectively seen directorial trademark, in 2016’s The Magnificent Seven, invading Rose Creek twice in his belief in money and capitalism.

The score does carry director Fuqua’s depiction of violence in 2016’s The Magnificent Seven:  à la the Rose Creek invasion scored on the track Street Slaughter.

(from left to centre-right) Production Designer, Derek Hill; Director of Photography, Mauro Fiore; and Director Antoine Fuqua behind the scenes of 2016’s The Magnificent Seven (Kismix.com Photo and Caption)

Perhaps the greatest takeaway from 2016’s The Magnificent Seven, especially given the director Fuqua’s subjectively seen trademarks, is the cinematography, courtesy of Director of Photography, Mauro Fiore. As seen in IMAX, the film’s colour palette – shades and mixtures thereof of black, orange, yellow and brown – coupled with the street-level view and real town settings, courtesy of Production Designer, Derek Hill, make the film cinematic.

On that note, 2016’s The Magnificent Seven, is observably shaky-cam free, even in its explosive final thirty minutes when explosions occur in nearly every part of Rose Creek. There are also a few Spielberg-esque parallel motion shots, and concomitant obscuring detritus, within the film.

Very simplistically, director Antoine Fuqua’s 2016 feature film, The Magnificent Seven, is an ochre-ly shot, atypically-soundtracked and explosively fun film that also makes you wonder who scheduled its release this far out of summer. Fans of director Fuqua’s work and the cast shan’t be disappointed.

(Whilst the opinions and observations are, unless stated otherwise, the author’s own, the following sources were used to acquire facts from: BET.com, Cinema.com, CoinFacts.com, CraveOnline.com, IMDb.com, LegendaryTrips.com, SlashFilm.com, WTAE.com)

Plot: a young widow recruits the help of a bounty hunter to save her town from a mining baron.

Act 1: Bartholomew Bogue besieges the town and violates and torches its church; Emma’s husband’s death at his hands prompts her to take action.

Act 2: Emma decides to go to Amador City to make her offer to Chisolm; Chisolm decides to accept her offer.

Act 3: Chisolm decides to recruit Faraday to their cause; Chisolm, Faraday, Emma and Teddy head off to recruit Goodnight Robicheaux.

Act 4: Faraday and Teddy manage to recruit Goodnight and Billy whilst Chisolm manages to recruit Vasquez; Chisolm and company decide to track down Jack Horne.

Act 5: Chisolm and company fail to convince Horne; they decide to journey through Native American lands.

Act 6: Chisolm decides to recruit Red Harvest after he tracks them down; Chisolm and company, now with Jack Horne, journey to Rose Creek.

Act 7: Chisolm and company decide to disarm and, later kill, Bogue’s men in Rose Creek; Chisolm decides to send the sheriff to Bogue with a message and addresses the townsfolk.

Act 10: Bogue and Chisolm’s forces amass on the town’s outskirts; Horne and Billy decide to execute their ambush of Bogue’s men.

Act 11: Goodnight decides to return to Rose Creek; he decides to alert them to the Gatling gun preparing to fire on them.

Act 12: Chisolm and company decide to evacuate the town after the first Gatling gun attack; Faraday, Billy and Goodnight decide to destroy the gun but are killed doing so while Horne is killed helping with the evacuation.

Act 13: Bogue decides to ride into town; Chisolm lures him back into the church and Emma decides to intervene and kill Bogue.