More often than not, with college being especially relevant here, adults in organisations aren’t about getting the youth out of the system, they want them in.

Antithetically is director and co-screenwriter Oliver Stone’s 1987 feature film, Wall Street, which is all about getting out while the getting’s escapable, rather than (un-dangerously) good.

But, then again, almost everything else, including himself, tells him to stick around.

Director Oliver Stone’s 1987 Wall Street film – not to be confused with its sequel, 2010’s Wall Street: Money Never Sleeps – is a film, often rather unsubtly, about the virtues of staying and leaving; about the core desires that perpetuate rapid advancement (à la Gordon’s near-iconic ‘greed, for lack of a better word, is good’) ; about dispassion  and passion (Gordon uses the former to dismantle the companies he owns whilst having the latter for money); and about how young people seek advancement on their own terms (à la Bud’s argument with his father over his stockbroking, so ‘one day you’re gonna be proud of me, you’ll see’).

Let’s get right into the trademark-hunting, courtesy of Deborah Allison at SensesOfCinema, Steven Hyden of Uproxx and our own observations.

That said and momentarily ‘done’, 1987’s Wall Street did, in fact, see Charlie Sheen’s Bud Fox aspire to greater prosperity from some degree of material poverty (from wanting ‘to be on the other end of that (sales call) phone’) to ‘there’s no nobility in poverty anymore‘ and eventually ‘I’ll always just be Bud Fox’).

(from left to right) Stars Charlie Sheen and Michael Douglas in a promotional photograph for 1987’s Wall Street (Firmex.com Photo)

Michael Douglas’ Gordon Gekko’s corporate raiding and insider trading is influenced by the likes of Ivan Boesky, an insider trader and arbitrageur, involved with the Leveraged Buyout (LBO) craze of the early- to mid-1980s.

He also informed on fellow insider-traders for a reduced prison sentence. and was known for

He was also known for this at a University of California, Berkeley commencement speech: ‘Greed is all right, by the way. I want you to know that. I think greed is healthy. You can be greedy and still feel good about yourself.’

The film’s two hours and sixteen minutes feel like anything but and clip by in a mixture of montages and documentary-meets-helicopter photography cinematography that makes the film feel as much about the environment that surrounds the likes of Bud Fox and Gordon Gekko as themselves. 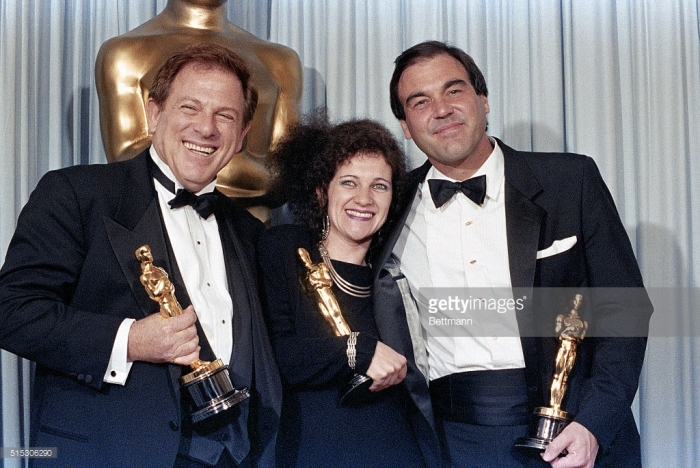 Oliver Stone himself appears in the film – much like in 1986’s Platoon or 2010’s Wall Street: Money Never Sleeps – just as Bud Fox commences the Teldar Paper trade on Gekko’s behalf. 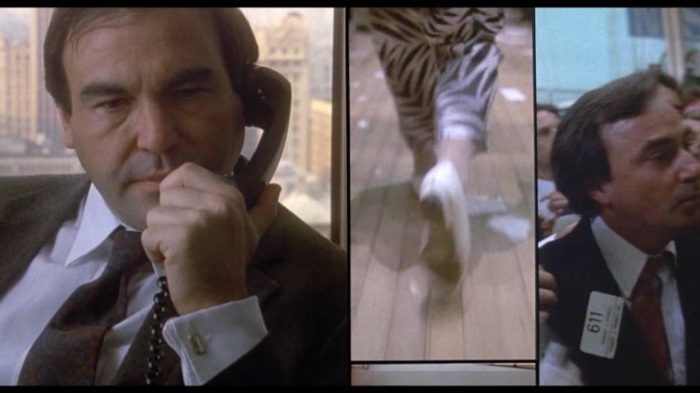 That being said, the screenplay, courtesy of co-screenwriters Stanley Weiser and Oliver Stone, is similar to 1986’s Platoon in that the protagonist is between two pillars of, simplistically seen, good and evil in Hal Holbrook’s Lou Mannheim and Michael Douglas’s Gordon Gekko.

Also like 1986’s Platoon, there is the idea that people, especially those that act as protagonists, aren’t wholly white or black but flit between, and are composed of the two, as seen with Bud’s flirtation with Mannheim’s philosophies and Gekko’s before acting on the intent of the former with the methodologies of the latter to save Blue Star Airlines.

(from left to right) Wall Street co-screenwriters, Oliver Stone and Stanley Weiser, on the set of 2008’s W. (CelebrityImages.com Photo and Caption)

That being said, Bud’s turn near film’s end, coming after his father’s heart attack is executed believably enough given Gordon’s prior, but unspecifically directed, rant against the educated but unhungry which Bud teeters on the edge of.

The score, by Stewart Copeland, echoes the film’s shooting style in that it is it alternates between classical strings arrangements and electronic music or even blends the two, à la the track Bud’s Scam. That being said, the iconic This Must be the Place  by The Talking Heads is wonderfully on-point as Bud moves into his new apartment; the electronic tracks work well with the computer and technology-oriented environments of 1987’s Wall Street. 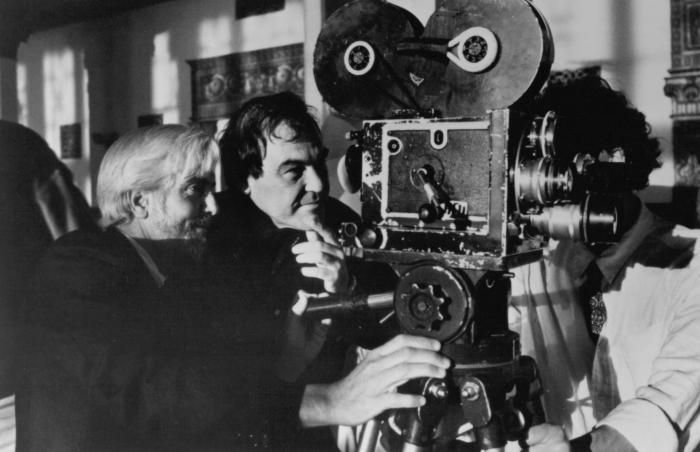 (from left to centre) Director of Photography, Robert Richardson and director, Oliver Stone seen behind the camera for 1995’s Nixon (MovPins.com Photo and Caption)

The cinematography by Director of Photography, Robert Richardson, is Platoon-esque in its depiction of people obscured or enclosed by their environment as indicated by shots of Bud and company just visible behind or through office cubicles and computers. The use of over-the-shoulder photography for characters aside, this film feels is very much about its titular locale as it is about the people who inhabit it.

A little too simplistically, 1987’s Wall Street is very much a film that breaking with its locale, is easy to cut through with a straightforward plot and atypically obscured photography.

(Whilst the opinions and observations cited above are, unless stated otherwise, the author’s own, the following sources were used to acquire facts from: Articles.ChicagoTribune.com, Biography.com, BusinessInsider.com, CheatSheet.com, ESLNotes.com, FT.com, HBR.org, IMDb.com, People.com, RISD.edu, SensesOfCinema.com, SnowFallingOnCedars.com, VanityFair.com, Yahoo.com)

Plot: a young Wall Street stockbroker looks to make it big with the aid of an infamous Wall Street corporate raider.

Act 1: Bud fails his last trade of the day; Bud decides to call Gekko to pitch some stocks.

Act 3: Bud decides to visit Gekko at the restaurant; Bud later goes out with Lisa.

Act 4: Bud incurs a loss for Gekko and decides to go to Gekko’s club and ask him for another chance; Bud accepts Gekko’s offer.

Act 6: Bud decides to deliver some paperwork to Gekko’s house; Bud chooses to approach Darien there.

Act 7: Bud decides to visit Roger to ask for his help; Bud later chooses to engage in further spying on Gekko’s behalf.

Act 8: Bud decides to visit his dad; Bud later chooses to return to Gekko’s home and meets Darien there again.

Act 9: Bud accepts his promotion at work; Bud decides to move into a new apartment and gets Darien to move in with him.

Act 12: Bud decides to confront his father over the latter’s defiance of Gekko’s offer.

Act 13: Bud, at Roger’s invitation, decides to attend the Blue Star Airlines meeting; Bud decides to confront Gekko over the latter’s decision to dismantle the airline.

Act 14: Bud chooses to push Darien away; Bud later decides to visit his heart attack-stricken father in the hospital and promise to revive Blue Star Airlines.

Act 15: Bud decides to pitch his new plan for Bluestar Airlines to its union heads; Bud later chooses to approach Sir Wildman with the same.

Act 16: Bud decides to trigger panic buying and selling of Blue Star Airlines stock; Bud succeeds in driving Gekko away from the airline.

Act 17: Bud is arrested in his office and decides to go willingly with the police; Bud later decides to confront Gekko in the park, on the police’s behest.