Echoing our previous reviews of the likes of Jaws (spoilers ahead) and Close Encounters of the Third Kind (spoilers ahead), director Steven Spielberg’s 1982 feature film – don’t worry, we’re saving a dedicated week for the likes of Indiana Jones – E.T. The Extra-Terrestrial is, in a title-justifying sort of way, makes its plot implied from the get-go all the way to the end.

That and there are several other trademarks – and feelings – over the course of E.T. The Extra Terrestrial that will be discussed in due course. 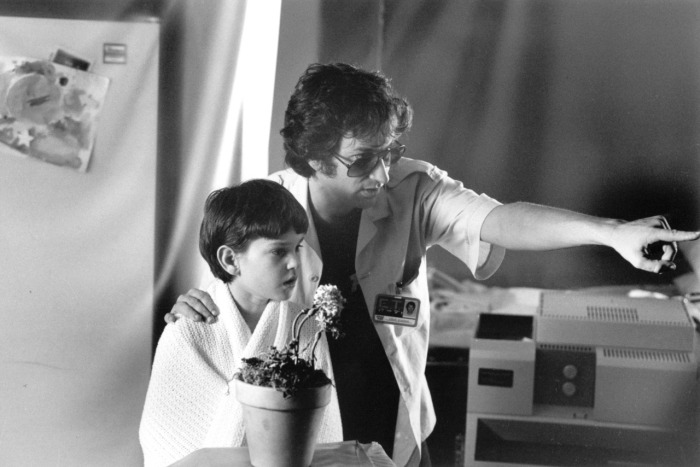 (from left to right) Star Henry Thomas and director Steven Spielberg on the set of the latter’s 1982 feature film, E.T. The Extra-Terrestrial (CineArchive.org Photo and Caption)

Among the directorial trademarks to be found in 1982’s E.T. The Extra Terrestrial, and as originally filmographically-wide identifed by LAVideoFilmmaker.com among several other cited sources below, are the following:

To top off the directorial commentary off is an excerpt from Scott Beggs, including an unverified quote from actor Richard Dreyfuss, of FilmSchoolRejects.com: ‘Spielberg is a unique filmmaker in his ability to tell uncynical stories. (…) There’s a positivity surrounding much of his work. A “niceness” that encompasses the tone and the aesthetic. There’s also a grand sense of adventure, and doesn’t that always stand in for a theme of human achievement? Of human possibility?’

E.T. The Extra Terrestrial has this quality in spades.

(from left to right) The screenwriter, the late Melissa Mathison, and star Henry Thomas seen on the set of 1982’s E.T. The Extra-Terrestrial (ScreenRant.com Photo and Caption)

On the screenwriting front, and echoing sentiments expressed by screenwriter Melissa Mathison’s in an interview about E.T. The Extra Terrestrial  to The New York Times’ Dave Kehr in 2002 : ‘We were striving to achieve ideas about responsibility, about unconditional love, about the unimportance of appearance and communicating on a deeper level‘. Whilst discussing the basis for a screenplay mightn’t necessarily work off of a brief excerpt such as that, the film does echo Elliot’s responsbility for E.T. (cue our article’s title and Elliot’s pained you’re killing him! You’re killing him!‘), Elliot’s subjectively seen unconditional love of E.T. in the absence of knowing what he is exactly and really Michael, Gertie and their mother’s transition to caring for E.T.’s plight, his appearance notwithstanding.

And really, the film is about a journey home.

(from left to right) Stars Henry Thomas, Drew Barrymore and Robert MacNaughton in a scene from 1982’s E.T. The Extra-Terrestrial (TheRebelChick.com Photo and Caption)

On the acting front, the trio of Henry Thomas’ Elliot, Drew Barrymore’s Gertie and Robert MacNaughton’s Michael have an unwavering and developing back and forth that drives the sibling aspect of the film. Their initial distaste for each other develops into a form of appreciation, Gertie’s doll being threatned notwithstanding, due to the need to get E.T. home. The adult cast, barring their mother portrayed by Dee Wallace, are largely never seen above the waistline until a shocking moment that is, really, best left preserved.

The score, courtesy of composer John Williams, haunts and drones during the opening titles and scene of the film. While the Flying Theme is wonderfully developed and added to until its full culmination in the first moment that Elliot and E.T. take flight, Adventures on Earth, as heard in the Elliot and E.T.’s final escapade from the government, is also fittingly upbeat and adventurous. 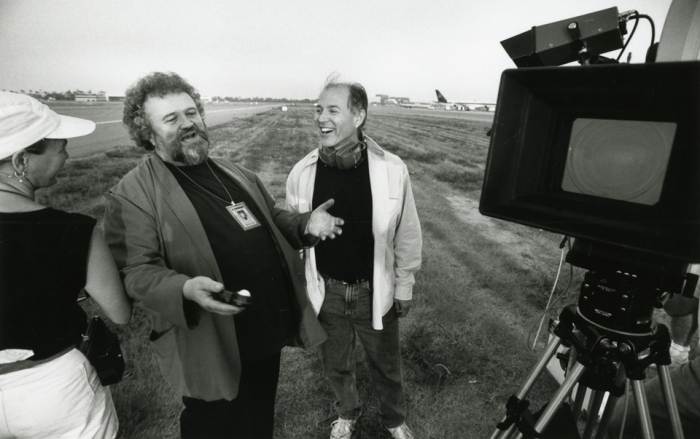 The cinematography, courtesy of director of photography, Allen Daviau, breaks somewhat with the Blade Runner-esque aesthetic of Close Encounters of the Third Kind but preserves some key shot compositions, à la the over-the-shoulder, adult-looking-down-on children and vice versa and near-glass matte depiction of suburbia that we saw in Close Encounters of the Third Kind. The forest scenes were especially curious in that they, perhaps more due to location than photography, felt distinctly Endor-y, à la Star Wars: Return of the Jedi.

Plot: an Earth-stranded alien solicits the help of a young boy to return home to his kind.

Act 1: E.T. flees from the trucks that raid the landing site and is left stranded on Earth as his people take off; E.T. escapes to the city suburbs.

Act 2: E.T. chooses to alert Elliot to his presence in the shed; Elliot later finds him the fields.

Act 3: E.T. reveals himself fully to Elliot outside the shed; E.T. chooses to follow Elliot back into the house.

Act 5: E.T. tries to show Elliot where he’s from in the universe; E.T. manages to hide from Mom.

Act 6: E.T. evades Mom despite Gertie’s attempts to introduce them to each other; E.T. later gets Elliot in trouble in school due to their telepathic link.

Act 7: E.T. shares his plans to ‘phone home’; E.T. and Elliot start putting the machine together in the garage.

Act 8: E.T. goes out for Halloween in a disguise; E.T. then flies Elliot and himself to the transmission site.

Act 11: E.T. is examined by NASA doctors; he later chooses to give his life force to (save) Elliot.

Act 12: E.T. is interred into the cryogenic pod; E.T. later resurrects himself and he, Elliot and Michael escape to the ship’s landing site.

Act 13: E.T. helps Elliot, Michael and their friends help him escape the government; E.T. later escapes with his people on their ship.