The implicit advice in the title is key. As you go, or choose not to go, to a nearby screening of director David Mackenzie’s 2016 feature film, Hell or High Water, please remember that this is a movie about ‘the things we do for our children’.

With that in mind, Hell or High Water, is easy to follow without the explicit admission of as much in the climax of the film.

All of that being said…

And as alluded to earlier, Hell or High Water, has a defined throughline, its strongest point lies in conveying the cause of the brothers’ criminality without needing a verbal explanation of why they are doing it: the billboards offering loans and selling homes, angry graffiti and people; and desolate industrial plants suggest as much. While his interview with The Guardian’s Andrew Pulver states as much – ‘the point is well-made; it is the sense of economic hardship, bred in the bone for generations, that underpins the brothers’ criminality‘ – while refuting any explicit directorial style: ‘Signature film-making seems rather dull to me‘.

Screenwriter Taylor Sheridan of thematically-relevant Sicario fame continues his, as cited by Variety’s Kristopher Tapley, ‘exploring the American frontier 150 years later’ – à la rural Texas and Oklahoma in Hell or High Water – a theme verbally explored by Gil Birmingham’s Alberto in the film. There is a distinct Western flavour to this film, as condensed in the standoff between criminal and officer of the law. That being said, the dialogue is interestingly done – à la the exchange between Toby and Tanner in their mothers’ room, between Ranger Marcus and the restaurant staff and between Rangers Marcus and Alberto and the T-Bone café waitress – and prominently audible when said.

Doubling down on our predilection to focus on a core acting duo, are two core acting duos in Hell or High Water: Chris Pine-Ben Foster and Jeff Bridges-Gil Birmingham. The former comprises Pine’s consistently cautious Toby and Foster’s generally-provocative Tanner; the latter include Bridges’ unflinchingly, jovially snide Ranger Marcus and Birmingham’s unflappable deputy Alberto. All four are unwavering until either the film’s, or their role’s, end here. 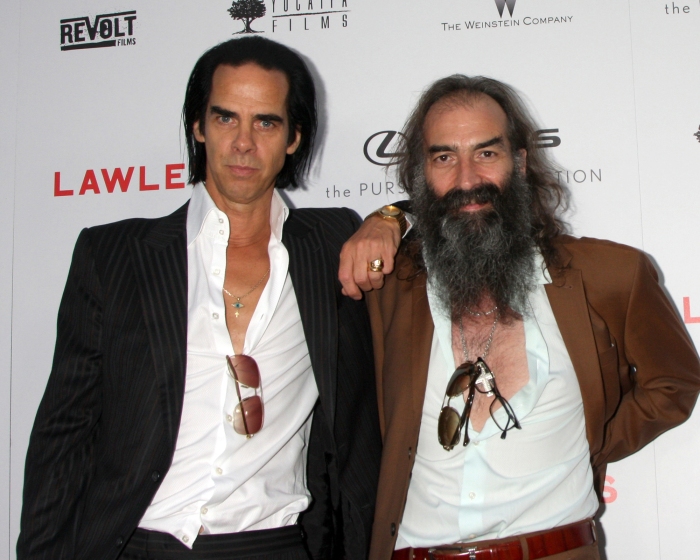 (from left to right) Composers Nick Cave and Warren Ellis at an event for the 2012 feature film, Lawless (JustLuxe.com Photo and Caption)

The original score, by composers Nick Cave and Warren Ellis, has a distinctly Western-y sound that is restrained and not thundering as such. The soundtrack is relatively more prominent yet equally depictive of the atmosphere of the film. I need to go back and listen to the score album, really. The score album, as carried on the American iTunes store, even carries the original title of the film, Comancheria.

The cinematography, courtesy of director of photography, Giles Nuttgens, is metaphor-rich – à la the use of silhouettes and the looking-down-upon-Tanner-at-a-crucial-point – and gives you a keen sense of the rural Texas setting, both horticulturally and economically as alluded to in the directorial commentary. It also keeps focus with Toby and Tanner’s frequent automobile escapades really well and in frame.

With more simplicity than either Hell or High Water, or really any film warrants, Hell or High Water, its open ending notwithstanding, feels like a modern-day Western, if for no other reason than its central robbers-meet-cops premise out in rural America. For the more casual viewer, the promise of a father-stealing-for-his-children’s-future story may hold some weight.

(While the opinions and observations cited above are the author’s own, unless stated, the following sources were used to acquire facts from: IMDb.com, ScriptShadow.Blogspot.ae, TheGuardian.com, Variety.com, WashingtonPost.com, WhereToWatch.com)

Plot: a poor, Texas man partners with his ex-convict brother to rob banks to provide for his children.

Act 1: Toby and Tanner rob branches of the Texas Midlands Bank and head back home; Ranger Marcus is set on their case.

Act 2: Tanner chooses to rob the bank opposite the restaurant; Ranger Marcus is sent back their way and interrogates the restaurant and bank staff.

Act 3: Toby chooses to have their robbings switched to cheque at the casino; Toby later goes to see Debbie; Ranger Marcus stakes out one of the Texas Midland bank branches

Act 4: Toby and Tanner choose to rob the Post, Texas branch instead of their original target; Ranger Marcus infers as much and heads to Post.

Act 5: Toby and Tanner rob the Post, Texas branch and Toby chooses to escape independent of his brother; Tanner chooses to lure the police away.

Act 6: Toby successfully gets past the police cordon and escapes; Tanner, holed up on a hill, kills Ranger Marcus’ deputy, Alberto and is later killed by Ranger Marcus.