There, for want of a less clichéd cliché, films that articulate what your tastes in film are when you can only opine in abstractions and not definitions.

Director Sam Mendes’ 2008 feature film, Revolutionary Road, for want of a similarly alluded to overused refrain, did that for me when my taste in film was limited to the ‘a long time ago, in a galaxy far, far, away‘ and aroused by the weird and left-of-field.

The other film that contributed was director Tomas Alfredson’s 2011 feature film, Tinker, Tailor, Soldier, Spy, but we’ll get to that in Alfredson week soon enough. 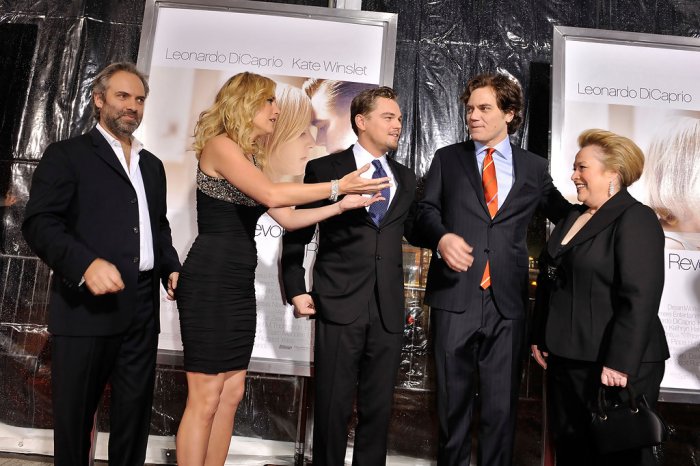 There’s a separate bit of commentary on how this film largely just gets the middle class experience, but more on that in our screenplay commentary.

This article if lacking in one thing that caused me to, not ungratefully extend Mendes week (apart from my ongoing move) is new Mendes-isms. While director Mendes has stated to The Guardian‘s Gaby Wood in a 2008 interview that, ‘there isn’t going to be – and I don’t want there to be – a “Mendesian“‘,  my welcome duty is to identify and study them nevertheless. To that end, there is the list of Mendes-isms that I want to confirm are there:

I am so excited for the rest of Mendes week right now.

(from left to right) Screenwriter Justin Haythe and director Sam Mendes at an event for 2008’S Revolutionary Road (GettyImages.com Photo)

The script and let’s help Frank Wheeler figure out what he wants to do with his life. April identifies with this at the start and later on and helps out, much to her detriment, as much as she can. That said, it’s where the screenplay identifies some middle-class mannerisms that gets me:

The plot is just that from start to finish, epilogue included, and the trademarks of suburbia make it that much better.

Breaking with the similarly-themed American Beauty – sedation in suburbia among other things – the main protagonists here are Leonardo DiCaprio and Kate Winslet’s Frank and April Wheeler. While they, for want of something more objective and less buzzword-esque, convincingly show the nascent joy, building euphoria, cynical forced-genuine laughter and general dispassion that comes with finding and losing your purpose in life, there isn’t that much of a knock-on effect on the supporting cast of David Harbour, Kathryn Hahn, Kathy Bates and, a delightfully Angela-esque clairvoyant, Michael Shannon.

Zoe Kazan is also in this movie as a secretary working in Frank Wheeler’s office under messrs Pollock and Bandy. Ty Simpkins is too.

In retrospect, while the often-used ‘Route 12‘ track from the score is used a little too observably in the film, but works great in conveying the more downbeat and, I daresay, restrained tone of Revolutionary Road as opposed to American Beauty. The soundtrack, especially The Ravens’ Count Every Star is great at nailing the love aspect of the love again-hate again cycle of the Wheelers’ relationship.

Taking a cue from the aforementioned album – Picture Window, in this case – the film has a genuinely theatrical aesthetic while indoors and a suburban utopian-photographic feel when on the outside looking in. There is a lot of natural lighting in the forests, rooms and buildings with only a few, in retrospect, pivotal, scenes set at nighttime. There is a gradual shift in camera position, looking up and down and particular characters at particular times which may just signify whether something is moving in their favour, if only fleetingly.

Contrary to how this article could have gone, the aforementioned article is a relatively bias-free take on director Sam Mendes’ 2008 feature film, Revolutionary Road. It’s especially worth watching if you are intrigued by films about the middle class or just looking for an, admittedly not admitted early enough in this piece, entry-point to what 1999’s American Beauty is also almost all about.

(While the article above drew upon the author’s opinions and observations, the following sources were used for any facts cited: FT.com, IMDb.com, LiveForFilms.com, Vulture.com, TheGuardian.com)

I’m currently debating changing format on The Cinemorph: whether we should write fewer – up until either 250 or 300 tightly-edited – words on our writers’ understandings of particular films or stick with our current no-words-barred format. Maybe we can start a new site altogether for the latter, more marketable option.

Plot: Frank wants to learn what he should, and wants, to do with his life; April decides to help him figure this out.

Act 1: Frank chooses to meet April from across the room at a party; they deiced to help him figure out what he wants to do with his life.

Act 2: Frank chooses to continue to home on Route 12 following a post-stage play argument with April.

Act 3: Frank chooses to go out with Maureen during the workday.

Act 5: Frank consents to April’s proposal to move to Paris to figure out what Frank would like to do with his life; their spirits elevate.

Act 6: Frank and April opt to sleep together in their euphoria after breaking the news to the Campbells.

Act 7: Frank convinces April to forego the abortion but stay on course with the Paris plan.

Act 8: Frank convinces April, who acquiesces, to call the Paris plan off.

Act 9: April chooses to commit the abortion; she succumbs to its side-effects and dies.

Epilogue: The Campbells and Givings separately, and in turn, talk about the Wheelers and Frank’s move to the city with the Wheeler children.